If you think you'll lose, you're lost,
For out in the world we find
Success begins with a fellow's will -
It's all in the state of mind.

Life's battle doesn't always go
To stronger or faster men;
But sooner or later the man who wins,
Is the one who thinks he can. 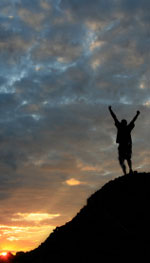 Getting Your Thinking Straight, Part 2

In order to control thinking, you are going to have to consciously experience being the thinker. The thinker is you, but it is "YOU" before you defined yourself with thoughts.

We are going to call this big YOU, who is capable to some degree of deliberately thinking. And the little "you's", who are embroiled in thoughts and ideas about themselves and their relationships with the universe, we are going to call identities. Among the identities there is one who identifies and protects an idea called "me"; this identity we call the ego.

Ego is almost entirely body-brained-based. That means it is subject to the same influences that affect a body. Things like emotionally indoctrinated desires, resistances, physical perceptions, drugs, electricity, physical damage, frequencies of light and sound, and of course, death. The life of "me" is pretty much a stimulus-response affair. Its principal motivation is selfish, and the only way to change its character is by pain or pleasure.

Thinking deliberately is the awakening of a non-conceptual "I" that exists separate from the mind. If your mind were a mirror, it could not reflect YOU. That's what I mean by being non-conceptual; you are not reflected by the mind. All the ideas and concepts you have of YOU are really mind created identities, and a mind created identity has very limited abilities to control the mind.

Source awareness is obviously a very high state, and to some people it is not real, yet. Realizing this state has been the goal of contemplative and meditative practices for thousands of years.

Let me show you how to empower a thought in your own mind from source that shapes your experience of reality. Deliberately think, with as much certainty as you can, "I feel the best I've ever felt."

Did you do that? Did some small doubt come to mind following that thought? Yes. Do you have to check with someone or something before you can decide how you feel?

Write the doubt down on a piece of paper exactly as it occurred to you. Don't bother about deciding whether you agree or disagree with the doubt, just acknowledge the fact that there was a doubt and write it down.

If more than one doubt shows up, write them all down, and acknowledge each one.

Questioner: How do I acknowledge them?

Harry: Just write OK after each one of them. Write OK like you are the president and you are signing off on some request that you are granting. Scribble OK and initial it. Remember, you are the boss.

All right, again, deliberately think, "I feel the best I've ever felt." Think it with as much certainty as you can. If there are still doubts, write them down and acknowledge them.

Repeat this as long as you have doubts. Not feeling that the statement is true is a doubt.

Questioner: I'm having some trouble because I have this pain in my back, and it's hard to feel the best I've ever felt with that pain there.

Harry: Write that down just the way you told me, "I'm having some trouble because I have this pain in my back, and it's hard to feel the best I've ever felt with that pain there."

After you've written it down, scribble your OK and once again deliberately think, with as much certainty as you can, "I feel the best I've ever felt."

Questioner: It's hard to get much certainty because of the pain.

Harry: That's fine. Write down, "It's hard to get much certainty because of the pain." And scribble your OK as the boss. Now, deliberately think again, "I feel the best I've ever felt."

Questioner: Well, it's getting better, but I still think about the pain.

Harry: Write down, "It's getting better, but I still think about the pain." And sign off on it.

Questioner: No matter what I say, you are going to tell me to write it down.

Harry: That's right. As long as there is some non-deliberate thinking arising in your mind, I'm going to ask you to write it down and sign off on it. You know why? Because I know you are the boss, and you can create anything you choose. Would you like to feel the best you've ever felt?

Harry: What are your considerations on it?

Questioner: There have been times when I've felt awfully good.

Questioner: If I could only feel that way once, I wouldn't want to waste it.

Questioner: I really don't think I could feel that good with the pain in my back.

Harry: Yes. Now, once again, with as much certainty as you can, deliberately think: "I feel the best I've ever felt."

Questioner: (laughing) This really is fantastic.

Harry: Yes, I told you that.

Questioner: Well, even though I'm skeptical and have been saying how I couldn't, or didn't want to, I realize that I do feel the best I've ever felt.

Harry: Are you sure?

Questioner: Yeah, even the back pain is gone. It just disappeared. How did you do that?

Harry: You did it. I just coached you to do it.

Harry: (addressing a lady in the front row) How do you feel?

Harry: Do you feel the best you've ever felt?

Lady: I was afraid of what I might do if I felt that good.

Harry: That is a wonderful doubt. I'll write it down for you, "I was afraid of what I might do if I felt that good." Are you ready to sign off on that one?

Lady: Yes! I feel the best I've ever felt. I really do.

If there is anyone here who doesn't feel the best he or she has ever felt, keep writing and signing off. I'm sure you're only a few doubts away from success.

From your smiles, I can tell that most of you are feeling the best you've ever felt, so this is a good place to end. Thank you very much.

How does Avatar affect future generations?

One of the goals of Avatar is to make people more aware, to remind them that their highest nature is nonviolent, and to increase the amount of compassion and cooperation on the planet.

If you fired an arrow, stopped it in its flight, and sighted along the arrow, you would see where it was going. If you stopped Avatar in flight and sighted along it, you would see that it is headed toward an enlightened planetary civilization. Every person who becomes an Avatar shifts the collective consciousness toward the goal of greater tolerance and understanding.

The hope of future generations is that we awaken in time to prevent our own self-destruction, an awakened consciousness that is increasingly immune to irrationality and that values wisdom. Helping yourself with Avatar helps everyone else, including future generations. With Avatar everyone wins.

It has been 17 months since I last Interned. In that time, I have bought a new business with the intention that it will supply the cash flow my family needs and frees up both my partner and I to do more Avatar.

Over this time, the tools have been very useful for dealing with overwhelm and a steep learning curve.

Since doing Wizards, in January 2006, and Integrity in 2007, my life has shifted incredibly. The clarity of being is now far beyond what I ever imagined possible.

My biggest success, however, is that my 15 year old son has just done the course. He has had a great time and it was awesome to watch the care and appreciation of the team working with him.

One of his greatest challenges was to focus his attention, which we worked on in Mini-Courses and Source Lists, and finally with the Limitations Handle. He now has his attention under his control. Watching as he has released and become present, and become Source has been amazing.

Thank you for your dedication and commitment to helping others. And of course for the tools. –R.R.

This Wizard Course did not only empower me so I am sure to have a more joyful life, a better partnership, it was also a great spiritual experience. I was so touched by Harry's talks and all the people from all over the world. I could really feel that we all have a dream, the same dream, and a lot of people before us (in former times) also dreamt it, and what is the core of all spiritual practices, religious, philosophies. We want a better world and we'll work for it. We create an Enlightened Planetary Civilization®. Thank you, Harry. –M.G.

I was born again through the Avatar Course. At first, when I did Section 1, I resisted. But as the course went through Section II and III, I felt my true self. I cannot describe it. Why didn't I do it before? I am sorry about that but I'm happy now. Thanks to the Avatar Course. I left my projection, low confidence, distrusting of others which I had used for a long time. Now I can find my true identity.

I expect a wonderful future. I'll feel this movement toward the Master Course. –K.B.

My gratitude is very deep, toward everyone involved with Avatar for helping me to stop living in difficulty and start living deliberately. The sense of self empowerment and unconditional love that I have created for my life and everyone around me fills me with inner peace that I have been searching for, for such a long time. I actually look forward to enjoying my life instead of fearing everything that could possibly happen next, while still watching everything that has already come to pass. Thank you so much for your loving support and for sharing your tools.  Sharing is caring.

Collective Consciousness Handling made me feel empowered to help the entire world and realize that I  am in control of what I want  my universe to be, because everyone in consciousness wants the same thing, we can create the world we want. –L.C.

The Avatar Course has been an incredible journey of Self discovery. Thanks for giving me the tools that I will use every day in my life. It really taught me forgiveness – most of all to myself, but also others. How important it is to be totally honest with yourself.

Thanks to all the compassionate people at the course and the rest of the world. I am ready to live my life. –K.H.

With Avatar everyone wins. Every person who becomes an Avatar shifts the collective consciousness toward greater tolerance and understanding. Helping yourself with Avatar helps everyone else at the same time. – Harry Palmer